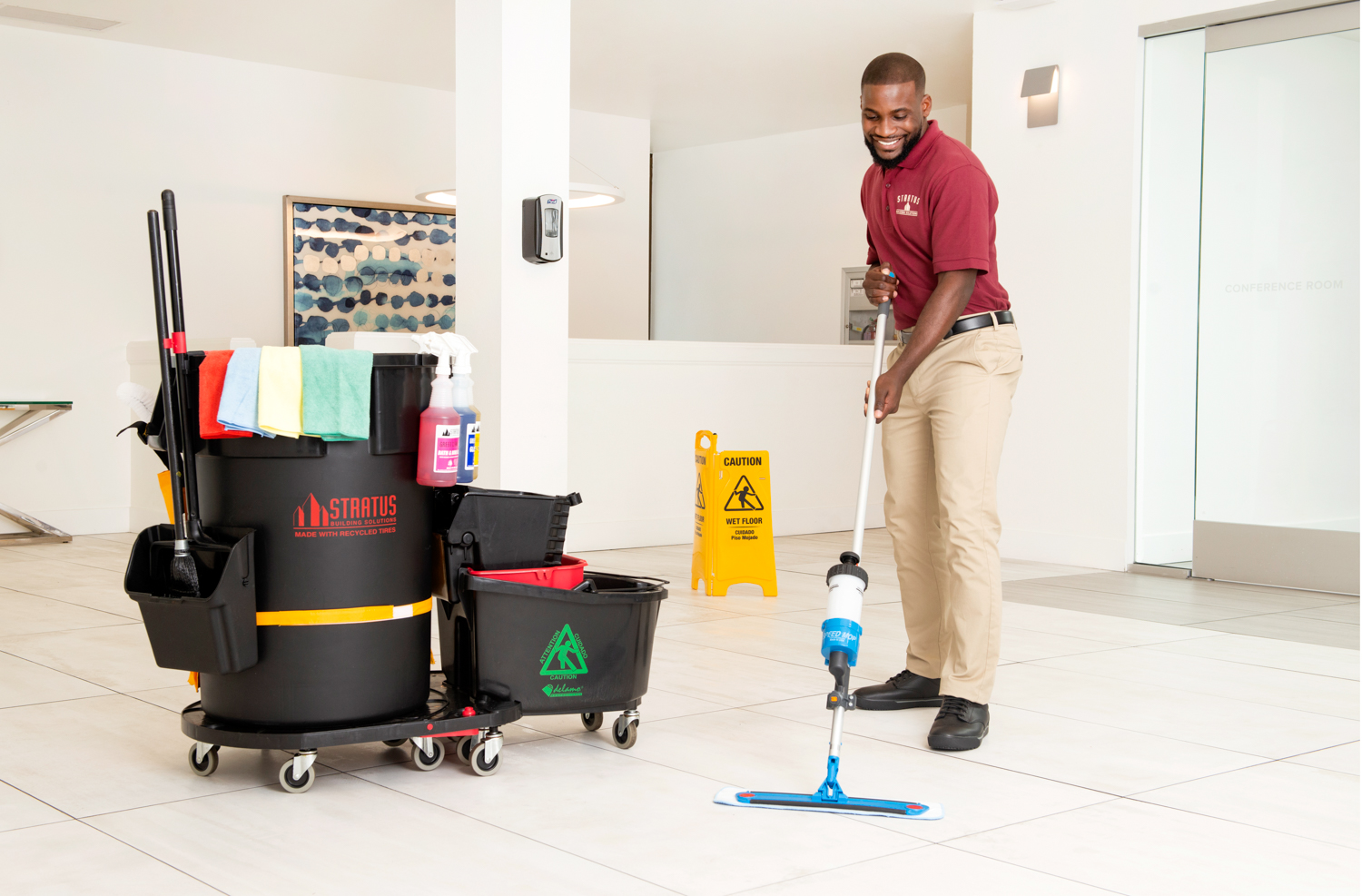 Office cleaning may be a dirty job, and somebody may have to do it, but there’s no reason to make it even more dirty. But somehow some of our office colleagues do just that. They’re sneezing and spraying germs everywhere, leaving toilets unflushed and generally being slobs.

A new national survey commissioned by Stratus Building Solutions, which asked 500 employed men and women from around the country about office cleanliness, found that as a group, we can do a lot better when it comes to keeping our work environment tidier. Cleaner workspaces lead to higher office morale and is easily achievable through the use of an office cleaning service.

In our survey, we found a lot of troubling workplace habits, such as gossiping and taking the thermometer hostage, but here are the seven habits that stood out the most as contributing factors to an unclean workspace.

Not flushing the toilet. Just over a quarter (25.6 percent) of the respondents said that their colleagues forget to flush sufficiently or leave the toilet clogged.

Are people worried about touching the toilet handle? Understandable, but imagine what that porcelain bacteria soup does to the office environment if the toilet is left unflushed overnight — or over the entire weekend. Plus, it’s just plain rude to leave that for somebody else. Common courtesy dictates you clean up after yourself, and that courtesy should extend to the office bathroom as well.

Not using the toilet correctly. Many office workers apparently don’t have the best aim when it comes to using the toilet. According to Stratus’ survey, 29.2 percent of respondents reported that their coworkers leave urine on the bathroom seat. That means if you’re unlucky enough to sit down and then realize what you’ve just sat on, you’re pretty grossed out!

And men, in particular, may want to note that if you have a unisex bathroom, you really should do your female coworkers a solid and either leave the toilet seat down or always remember to put it down once you’ve finished. Eight percent of the survey-takers said that their coworkers leave the seat up in the bathroom.

Bad food habits, Part I. OK, some people cook foods that have a strong smell, like fish, in the microwave, and a lot of us don’t like that. But that doesn’t exactly make an office less clean. But what doesn’t help the office environment is leaving food in the breakroom refrigerator until it spoils (34.8 percent of respondents say that that happens).

Very bad food habits, Part II. Still, at least a messy refrigerator will probably be contained to inside the refrigerator, and nobody will likely be harmed as long as they don’t eat the moldy ham and cheese sandwich. It’s another story altogether when coworkers leave food in the trash can so long that it rots (22.9 percent) or when they leave dirty dishes in the office sink (26.4 percent).

Aside from the smell, some foods are going to attract bugs — and may also serve an invitation to rodents. Just over half (51.3 percent) of the respondents said that they had seen insects or rodents in their office. You may think a few of your coworkers are rats, but if you are literally working amongst vermin, you have a serious health and safety problem on your hands. According to the Centers for Disease Control and Prevention, some of the diseases that rodents can spread to humans include rat-bite fever, hantavirus pulmonary syndrome and hemorrhagic fever with renal syndrome — none of which are good news!

We won’t get into all of the gory details, but as you can imagine, nothing you pick up from a mouse or rat will be fun. Rat-bite fever, for instance, involves being bitten by a rat, getting a fever and possibly dying.

Sweaty coworkers. Sure, we all can feel sympathy for an office worker who has a sweating problem. But many coworkers exercise throughout the day or perhaps bicycle to work and then come in smelling a little less-than-fresh.

When asked, “Do any of your colleagues work out and return the office during work hours?”, 43.7 percent said, “Yes.” Now, hopefully, some of those colleagues shower after exercising. But probably not all of them do. At least when asked if their coworkers, or their clothes and shoes, sometimes smell bad when they return, 35.4 percent said, “Yes.” And 5.8 percent of respondents and 6.6 percent complained, respectively, of coworkers bringing in gym bags reeking of sweat, and wearing or leaving out smelly gym clothes and sneakers.

Bringing colds into the office. There are too many employees and executives who are likely coming into the office when they shouldn’t be. According to those surveyed, 19.3 percent said that colleagues sneezing and coughing all over the office is a problem.

In fact, when asked, “Do you use a paper towel or handkerchief to open doors because you think your office is unclean, 51.3 percent of the respondents said, “Yes.” But here’s the kicker: out of these 500 surveyed employees, 41.2 percent said that they have seen a coworker throw up at work. As you can imagine, some office vomit stain on the carpet isn’t going to help keep the flu at bay.

No real cleaning habits whatsoever. Most businesses have some sort of cleaning mechanism set up, fortunately. Only 4.4 percent of the respondents said that “no one” cleans the office. (Presumably, somebody does in those offices — eventually — it’s just nobody’s responsibility.) Still, that’s a little scary when you consider what that might potentially mean — dirty toilets, a dirty sink, germy doorknobs and human sweat and bacteria everywhere.

And while that may not sound as if there isn’t a non-cleaning epidemic, 21.7 percent said that they, the employees, do it “when we have time.” Arguably, a little over 25 percent of America’s offices are underperforming when it comes to keeping their offices sanitized and well maintained. It’s apparent that office cleaning is being neglected, a problem that is easily remedied by employing an office cleaning service.

So if you own a business and aren’t using an office cleaning service, maybe you should. You may not be able to prevent your employees from coming down with a cold or cough, but maybe you’ll be able to keep them from feeling sick about coming to work. Hiring a professional commercial cleaning business, like Stratus, can help boost your employees’ morale, increase productivity and even positively impact your bottom line.